US Housing Market is Still Collapsing 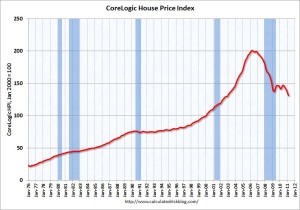 The Economic Collapse has put together a stupendous list of 20 startling facts about the US housing market:

1. According to Zillow, 28.4% of all single-family homes with a mortgage in the United States are now underwater.

2. Zillow has announced that the average price of a home in the U.S. is about 8% lower than it was a year ago;

3. U.S. home prices have now fallen a whopping 33% from where they were at during the peak of the housing bubble.

4. During the first quarter of 2011, home values declined at the fastest rate since late 2008.

9. Historically, the percentage of residential mortgages in foreclosure in the United States has tended to hover between 1 and 1.5 percent. Today, it is up around 4.5 percent.

10. According to RealtyTrac, foreclosure filings in the United States are projected to increase by another 20 percent in 2011.

11. It is estimated that 25% of all mortgages in Miami-Dade County are “in serious distress and headed for either foreclosure or short sale“.

13. Sales of foreclosed homes now represent an all-time record 23.7% of the market.

14. 4.5 million home loans are now either in some stage of foreclosure or are at least 90 days delinquent.

15. According to the Mortgage Bankers Association, at least 8 million Americans are currently at least one month behind on their mortgage payments.

16. In September 2008, 33% of Americans knew someone who had been foreclosed upon or who was facing the threat of foreclosure. Today that number has risen to 48 percent.

17. During the first quarter of 2011, less new homes were sold in the U.S. than in any three month period ever recorded.

18According to a recent census report, 13% of all homes in the United States are currently sitting empty.

20. According to Zillow, the United States has been in a “housing recession” for 57 straight months without an end in sight.

Source: The Economic Collapse: :”Don’t Buy A House In 2011 Before You Read These 20 Wacky Statistics About The U.S. Real Estate Crisis“

[The following article is part of a larger commentary, available here.]

As of last year, 700 sqft of Honda’s roadside solar generators produce enough hydrogen in one week to fuel one car for 175 miles. Clearly this is not enough, but it could be if you use more land.

If we assume that cars get about 25 mi/gallon of gas, then each acre produces the equivalent of about 62 gallons of gas per day. If gas costs $3/gallon, and hydrogen is priced to drive the same distance for the same cost, then each acre produces about $187/day in sales. That’s $68,140/year. Maintaining solar arrays is pretty cheap, let’s assume $5000/year/acre. If we discount the implied cash flow using a real rate of 5%, the value is $1.26m/acre. Obviously, an acre of solar arrays is expensive. Today, the cost would be about $1.5m, and exceed the net present value. But not for long!

Technology is progressing at a rapid rate. Today’s 6% efficiency may improve to 30% within 10 years. If the efficiency rises to 30%, the negative net present value of producing hydrogen turns positive. Very positive: $5 million per acre.

And don’t forget, for added upside you can install a wind farm over your solar arrays, and produce with both. Own some land.

Available with charts and links here

GDP and industrial production during the 3rd quarter grew at about 4% and 3%, respectively, with a relatively stable outlook, and consistent with long-term averages.

We expect corporate profits in the United States to rise again in 2006, at a slower pace than in 2005 but better than consensus expectations. We expect that energy, other commodity stocks, and selected technology shares will provide particularly good gains.

Cheaper US equity valuations relative to earnings and to bonds have been driven in part by reduced overseas demand. Foreign investors moved aggressively into US stocks starting in 1997, but they have been reducing their purchases of stocks since 2002, focusing instead on bonds.

Foreign governments are buying US bonds to stabilize the value of their currencies. Insurance companies and pension funds are buying bonds to offset predictable liabilities. These sources of demand are driving up bond prices independently from other investments, making bonds less attractive.

Any one of these changes could cause a drop in the price of US bonds. For example, if Japan privatizes its postal saving system as planned, it would mean that more than ¥224 trillion ($2.1 trillion) in savings and ¥126 trillion ($1.2 trillion) in life insurance would no longer be invested by the Japanese Government. Japanese citizens may be less eager to buy US bonds than the Japanese Government has been. Indeed, they may redirect some of those assets into Japanese equities.

Global growth is on fire

Worldwide political reforms since 1989 have brought more than 4 billion people (almost 2/3 of the world population) into market-driven global economies, and productivity per person continues to grow rapidly. The result of these two trends is a very rapid rise in global production. Developing nations with low wages and taxes continue to gain access to capital and skilled labor enabling them to grow faster than their domestic competitors. Many international stock markets have been outperforming US markets, and international diversification will be even more important going forward than it has been in the past. The oversupply of global labor is not likely to be fully utilized in this decade. As global production grows, the voracious demand for commodities to fuel this expansion is driving up prices, particularly for energy and industrial metals where supply is tightly constrained (3rd Quarter ’05 commentary).

Rapidly changing technology is forcing many industries to evolve. The convergence of media and communications toward a common internet protocol means that phone, cable, and radio companies will suffer falling prices in a new competitive landscape. Wider accessibility of broadband connections should also spur the growth of internet services. This same trend is making information available across borders, accelerating learning and research, improving productivity growth, and accelerating political reforms. The fragmentation and expansion of the device market is opening up the semiconductor market to more competition. Intel is likely to maintain large market share in the PC and laptop markets, but handhelds, gaming, smart HDTV, and other new markets will allow more segmentation of semiconductor companies.

In June 2004, the Federal Reserve began raising rates from 1% in 0.25% increments to a current rate of 4.25%. This pattern is widely expected to continue at least through Chairman Greenspan’s last meeting on January 31st.

Prices, as measured by the Consumer Price Index (CPI), rose by 3.4% in the year ending November, still within the low range in place since 1983. The inflation adjusted (or “real”) Fed target rate is still below average. Observing the historical average, a neutral real rate of about 1.9% might be expected (implying about 4 more rate hikes like the last 13).

Our expectation is that the Fed will stop raising rates before returning to a 1.9% real rate. Productivity gains, cheap imports, and outsourcing will continue to restrain inflation, suggesting the Fed can afford to keep rates low (4th Quarter ’05 commentary).

Housing prices have been rising rapidly for several years, leading to predictions of a housing bubble. Irresponsible speculation and use of interest-only loans have been widely reported. The value of homes purchased has almost quadrupled since 1991 .

Speculation and rising prices are addressed in part by the Fed tightening because higher rates make mortgages more expensive. However, if the Fed remains concerned about housing prices when inflation is well controlled, tighter regulation of lending standards would be a better tool than continuing to raise the target rate.

But are housing prices a problem? There may be a regulatory problem with low-credit lending, but we don’t see evidence of overextended homebuyers or excess housing supply. Housing prices are rising in line with the general trend in other commodities and assets. Everything that goes into building a home, from cement and copper to lumber and land, is rising in price.

Alan Greenspan and James Kennedy recently published a study including historical loan-to-price ratios. Mortgages represent a smaller percentage of the value of the home than the average of the past 15 years.

If mortgage rates rise rapidly, there will almost certainly be more mortgage defaults and foreclosures because of the current popularity of floating-rate mortgages. In that scenario, prices might stagnate on a national scale and could fall in some markets where negatively amortizing loans are popular.

The broader risk to the economy risk is that consumer spending could slow when housing prices return to a more normal rate of growth. Consumer spending is linked to housing prices because homeowners are extracting equity from their homes as the value rises. Equity is being extracted from homes at an annual rate of hundreds of billions of dollars – recently averaging more than 6% of disposable income. A drop in equity extraction has the potential to reduce disposable income by 6%. Offsetting this, consumer net worth is rising rapidly and is at an all-time high.

Fragile stability of the US dollar

World trade is rapidly expanding, and the US is importing far more than it is exporting, resulting in a trade deficit. The historically large trade deficit is a risk to the strength of the US dollar because at some point, all those foreign debts have to be repaid by buying foreign currencies. The magnitude of the risk grows with the magnitude of the debt.

The federal budget deficit is also historically large, but not relative to the size of the economy, and it has been improving since August 2004. In addition, Americans own much of the federal debt, so paying it back will have less effect on the currency. At the end of 2004, foreign holdings of US Treasury debt were $1.886 billion, 44% of the total public debt .

In aggregate, the dual deficits and foreign purchases of US investments create foreign demand for US dollars of about 14% of GDP. Having supported strength in the US dollar, this foreign demand also represents a substantial risk if it slows down or stops.

Exposure to a basket of global currencies, particularly those from countries that are net exporters of commodities, is probably a safer position than being concentrated 100% in US dollar-denominated assets.

We are optimistic about global economics and financial investments over the long term. Skilled labor is widely available, and international trade is increasingly cost-effective. Thoughtful diversification across sectors, asset classes, and countries remains a sound investment approach, although US bonds appear unattractive. Global tax and regulatory reforms are increasingly favorable to investors and the economy. The financial markets are increasingly capable of supporting production, distributing risks, and creating resilience against shocks like war and natural disaster. These trends point to higher asset values, lower downside risk, and higher returns on investments.

Posted in Media, Tech, The Future